On 14 December, at the RUFA Space, the photographic exhibition “Agadez – Rosarno. Luoghi migranti allo specchio” was inaugurated with the support of RUFA – Rome University of Fine Arts. Medu – Medici per i diritti umani presented the photos of Olmo Calvo and Rocco Rorandelli. The protagonists are the city of Agadez, leads to the hope of a better future and place of migration flows and people assisted by the medical psychological team of Medu in the humanitarian field set up by UNHCR Niger.

Stories of women with lives suspended through looks of hope and resignation, of pain and relief, of love and anger and farm workers deprived of the minimum requirements of dignity.

In recent years hundreds of thousands of men, women and children have joined the city in flight from conflicts and violence, in waiting to face the crossing of the Sahara towards Libya, in what the migrants themselves call “the way to hell”. Since December 2017, refugees and asylum seekers, mostly Sudanese, have been following the same path in the opposite direction, fleeing from the Libyan torture camps, going back to Agadez.

The exhibition also shows Rosarno, a city known for its ‘ndrine, the “gardens” and the revolt of foreign laborers. Every year, during the citrus harvesting season, more of 2000 migrants reach the Piana, providing cheap labour without rights to local producers, within an opaque and unfair production chain. For years, slums, abandoned farmhouses and ministerial tent cities have been the salient features of the landscape of exploitation. 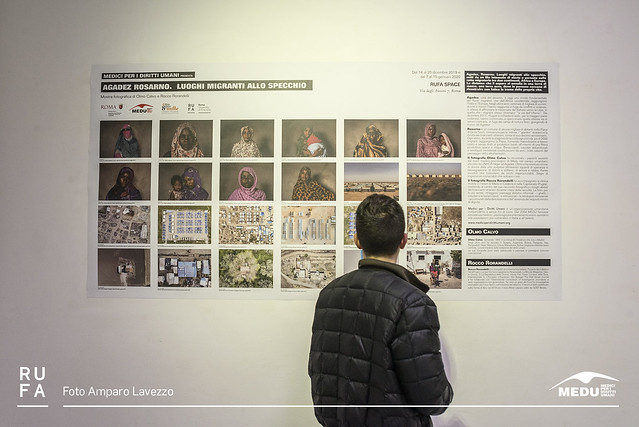