Desktop publishing has almost completely replaced previous technologies for the creation, layout and production of publishing products and has revolutionized contemporary typography.

For this reason the meeting with Benedetta Torrani was of fundamental importance for all those RUFA students interested in the fields of publishing graphics and interface graphics.

The talk, entitled “I periodici che hanno inaugurato l’editoria digitale”, was held on Wednesday, February 5th in the Aula Magna in via Taro, curated by lecturer Luigi Iacobelli, and focused on the analysis of publications dealing with videogames and graphics.

With her speech she offered a three-hundred and sixty degree overview of the publishing market, starting from the first Italian magazines in which the production process was, in whole or in part, linked to menabos and films, then moving on to the gradual introduction of desktop publishing and the difference in working methods. The aim is to verify whether interfaces and software have influenced the editorial graphics of those publications that were the first to experiment with the use of new techniques and production methods. 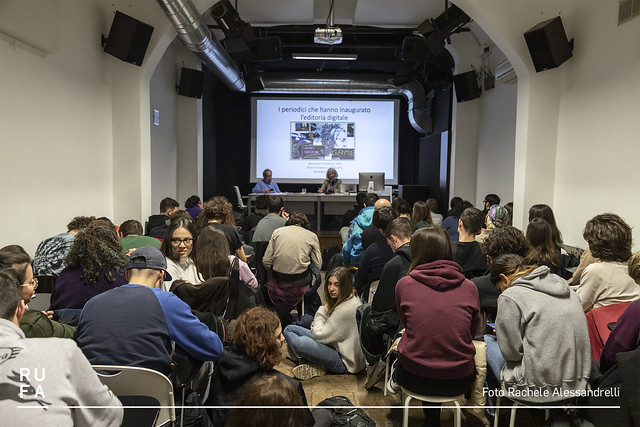 A convinced and concrete support for art, but above all for those who are called upon, in the coming years, to ensure that Made in Italy can further increase its relevance at global level. The Bel Paese’s propensity for artistic production is now one of the three best known brands in the world. This is… Find out more

Call for the selection of 12 projects for Sala Santa Rita

The Sala Santa Rita reopens in the very centre of Rome, near the Teatro Marcello, with twelve contemporary art works to be chosen through a call for applications that has already been published. Formerly known as the “Church of Santa Rita da Cascia in Campitelli”, the Sala Santa Rita has hosted exhibitions, installations and performances… Find out more