It took about five months. It all began last October with the visit to RUFA of the Italian Ambassador to Mexico City Luigi De Chiara and his wife Idoia Uribarri. The project? Simple and exciting in the same way: transforming the Embassy’s representative office into a museum of contemporary art and rewarding the educational path where lecturers and students interacted.

33 projects were presented. A detailed and careful selection made it possible to identify 9 works ready to leave for Mexico City. After 150 days and a long transfer, which retraced in a modern way the journey towards the unknown made by Christopher Columbus, the Italian Embassy in Mexico City welcomed the creations made by RUFA.

“In the general framework of the policy of diffusion of Italian culture and art in the world – explains the director of the Academy Fabio Mongelli – the Italian Embassy in Mexico City and the Rome University of Fine Arts have decided to give substance and form to a collaboration that aims to reflect the multiplicity of artistic techniques existing in the contemporary panorama of Italian visual arts, to which academic education always attaches equal importance and dignity. The future objective is to give shape to joint cultural initiatives”. 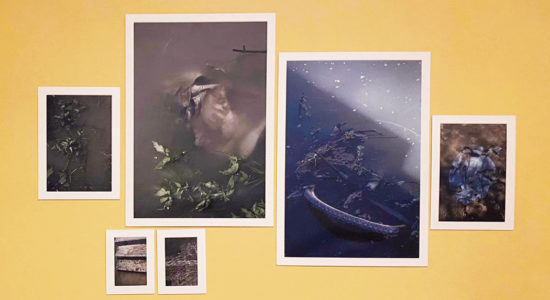 Born on the river banks of the Tiber, Rome has forgotten its ancient relationship with this watercourse. Yet there were many rituals dedicated to the river and the god Tiber, such as the “Tiberinalia”, instituted by Romulus himself. Today the Tiber has ceased to be part of Roman life: suffocated by nineteenth-century walls, it flows slowly and polluted in a succession of obscene decorations of plastic bags, rags, garbage and rubbish.

The photographic installation “Tiberinalia – Inside the river” is an attempt to bring back to light the ancient and sacred waters, celebrating their colours and turbidity, in search of that unprecedented interaction between nature and garbage that today, unfortunately, is the new spirit of the river. 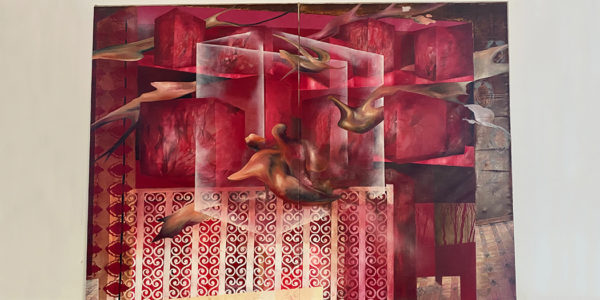 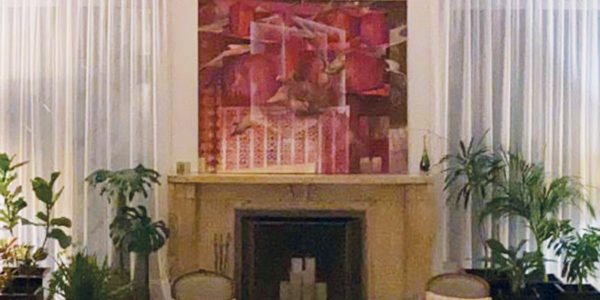 Telling about human fragility and leaving a very important and relevant reflection: What is really valuable in society? Does everything really have a price? You are conditioned to believe in so many certainties, but what is the real risk? The intention is that people can linger in different places within a painting and think in different directions. It is important to have a tangible temporal component that represents a real space in order to represent illusion without excluding certainties. 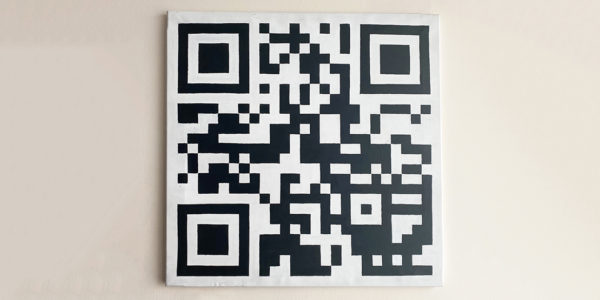 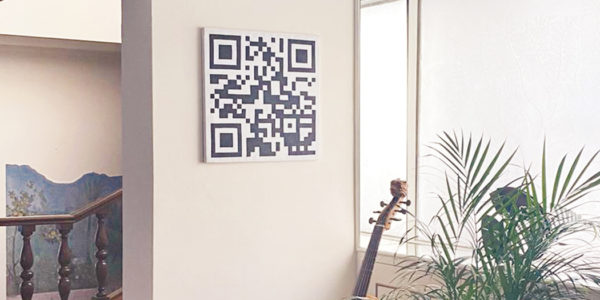 The search for a universal image as a thought investigation and the QR code that is untied from its current function to show an interactive fruition, involving the observer. To show that one is dependent on the screens of electronic devices and therefore “force” a mobile fruition, as a declaration of an alienating laziness. To present this analysis the code has been represented not by electronic techniques, but by painting it on canvas.

The work, like all QR Codes, refers to a site that appears on the user’s electronic device: www.humanitynotfound.com. It contains the fusion of two figurative paintings: one represents the sea, the other a figure of a woman seen from the back.

Humanity not found, is taken from the code “Error 404 – not found” that appears when a problem is found on the web that informs the user of the absence of a certain resource. The human figure is digitalized through a “pixellated” sign to demonstrate the fading of human individuality in the media and technological context. 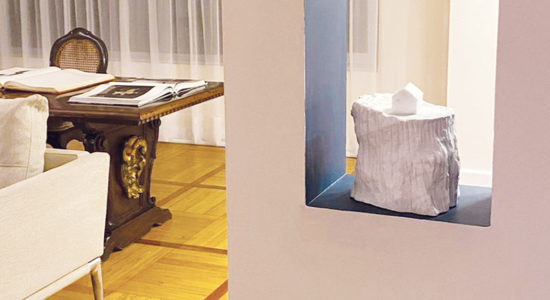 A project carried out as a result of personal research on emotions, linked to memories. It is a work in marble, a hard but at the same time fragile material, which depicts a house on a tree trunk. The little house, which differs from the trunk because it is smooth, as a child would draw it, is the one in which the artist grew up and now has only a memory. The trunk, instead, rich in wood grain and more realistic, is connected to today’s reality. The real subject of the work, however, is the clean cut of the trunk that separates the nostalgic memory from the awareness of reality. 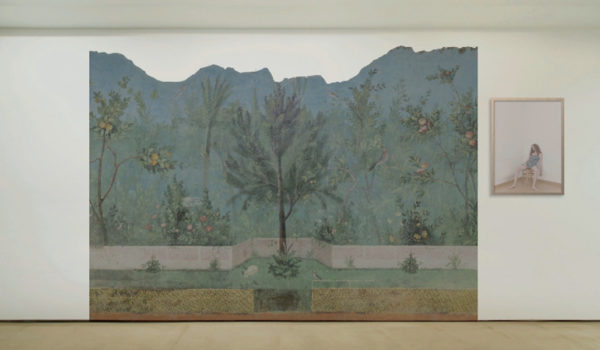 The Roman Garden is the second chapter of “Finisterrae”, a research that investigates Southern European identity and its current state of crisis. The first chapter focuses on Lusitania, in Portugal, this one instead deals with contemporary Italy. The work investigates the common origins of the Mediterranean and the construction of a political Europe.

The approach is an aesthetic reflection rather than a historical research on antiquity. Starting from the traces of ancient Rome, a garden is recreated as a metaphor of today’s Italy, composed of ancient frescoes and landscapes. If the frescoes represent the idealization of nature and culture, the landscapes show the effects of time and history, making the garden a symbol of beauty and decadence. 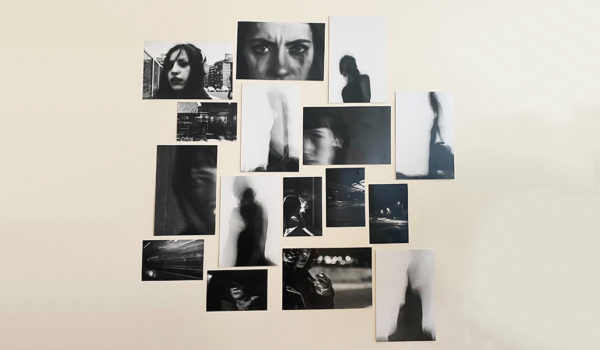 It is a photographic project that attempts to document the apathy, lack of depth and depression of the Z generation, i.e. of children between 15 and 25 years old in the Roman and suburban areas. The use of black and white photographic blur emphasize this state of mind and describe an anesthetized world, too fast for people who can’t keep up with the times. Among the various images there are also self-portraits of the author, that is the clearer, more indefinite images, symbol of the research and intimacy of the work. 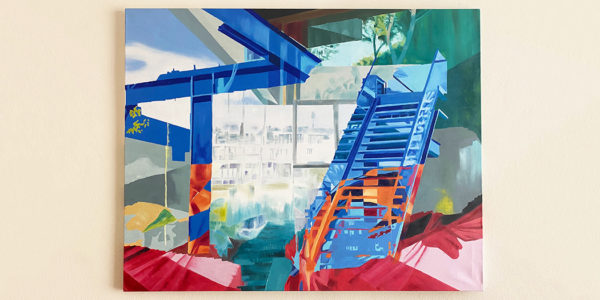 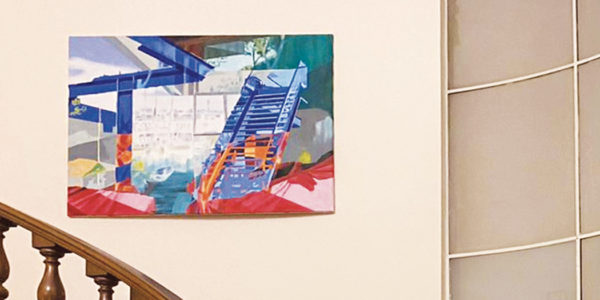 Color layers that generate a sense of depth in which the viewer can dive.At the same time, the viewer is deprived of the opportunity to anchor at a clear and stable landmark that generates a sense of comfort. Therefore, the observer finds himself partly active in the composition, but without being able to have control over it. The disorientation generated is also due to an illusory environment in which it is possible to recognize some elements characterizing life and society itself, but which involves the viewer in all aspects. The insertion of materials taken from different realities are a nodal point. Through spectral elements we want to recreate a unique image whose attempt is to trigger a reflection on the discomfort experienced by contemporary man. 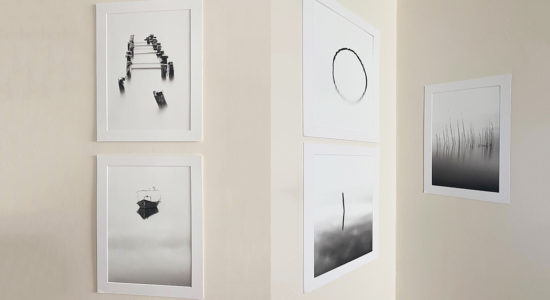 ValerioVesci
An inner journey into the silence and estrangement of the city. The photos are all taken at dawn, at Lake Bolsena, when everyone is still asleep, in the middle of nature there is only the sound of silence. The subjects of the images are all natural elements except one, the boat, which is abandoned in the middle of the water and does not welcome the human figure. The solitude of that place and the silence that is present at that hour transforms the experience of the shot into a moment of inner reflection and self-inspection. 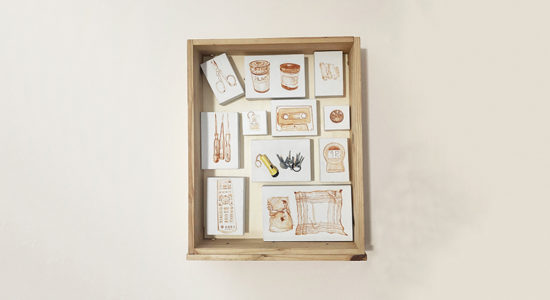 A faithful, precise and artistic reconstruction of the “drawer” of the author’s grandfather, containing all the objects of his daily life painted on small canvases. The work wants to be the physical representation of what are the boxes of the “memory” of the artist himself, which manifest, propose, chase each other and, thanks to the potential of expressiveness, materialize, taking shape and substance, transforming from intangible to tangible.

Open House Rome is back

Open House Rome is back a year after the last edition: the project created by a group of architects and communicators with a focus on social and cultural innovation. In just one weekend we celebrate design and architecture in the capital. Some 200 sites from all eras and usually inaccessible are opened to the public… Find out more

Skuola.net dedicates to RUFA a live event that allows high school students and those who are preparing to choose the most suitable training path for their needs, to gain awareness, identifying the study plan that best suits their skills and aptitudes. The Digital Open day RUFA and Skuola.net have scheduled a Digital Open Day for… Find out more

Exhibition: We are what we eat

The IILA-International Italo-Latin American Organization presents an exhibition at the Rome Museum in Trastevere, from 15 September to 31 October 2021, of the projects of the winner and finalists of the XII PHOTO IILA, an award dedicated to Latin American photographers under 35 years of age, created in collaboration with the Latin American member countries… Find out more

A reflection, so as not to forget the event that twenty years ago radically changed the world and whose consequences are still being felt today. Genny Di Bert, RUFA lecturer of Phenomenology of Contemporary Arts, in September 2001 was living in New York for professional reasons and was witness to the attack on the Twin… Find out more

EXXTRA at the Superdesign Show

After the opening at RUFA Space, EXXTRA, the exhibition project of the Multimedia Arts and Design school, moves to Milan for the Milan Design Week that will be held in September. The exhibition, visitable from September 4 to 10 is part of the Superdesign Show, and more specifically of the Discovering – experiments and new… Find out more