RUFA hosted the presentation of the first edition of the project “Beyond Binaries. Residencies for participatory and transfeminist art’.

The project, promoted by the Cultural Association Erinni, is the winner of the VitaminaG call for proposals within the GenerAzioniGiovani.it programme, financed by the Youth Policies of the Lazio Region with the support of the Department for Youth.

The seminar “Beyond Binaries. Residencies for a participatory and transfeminist art” stems from an awareness of identifying, in one’s daily experience, issues related to identity and gender dynamics, often closely connected to other forms of social complexity. For this edition, we chose to specifically examine the Torpignattara neighbourhood, historically a place where migratory trajectories and different communities have settled.

The project will take place in two phases: from 20 to 30 June, lз artist Mara Oscar Cassiani, collective Call Monica, Ginevra Petrozzi, Giulia Tomasello, in residence in the neighbourhood for a week, will carry out a series of workshop activities open to the territory – accessible free of charge by booking on the official website – aimed at involving the community of reference and raising awareness on the various themes proposed. The workshops developed by the artistз were conceived following a study of the territory supported by the anthropologist Silvia Antinori, carried out thanks to the connection with the fervent network of local realities and micro-territorial actors. This research took the form of a series of interviews with the communities of women, female and non-binary identities, and LGBTQ+ groups settled in the neighbourhood, with the aim of producing an analytical report in which shared roles, identities, issues and beliefs would emerge.

The objective of the workshops is to develop an artistic action that can represent a moment of collective reflection and transformation of critical issues into actions, thus offering the public involved the possibility of rethinking their experience through the potential of artistic languages.

In September, the second phase of the project will include a group exhibition at AlbumArte – a well-known independent exhibition space in Rome – which will collect the outcomes of the workshop experience.

Speakers at the conference:

– Arianna Forte (Founder, Erinni) introduces the association and the Beyond Binaries project 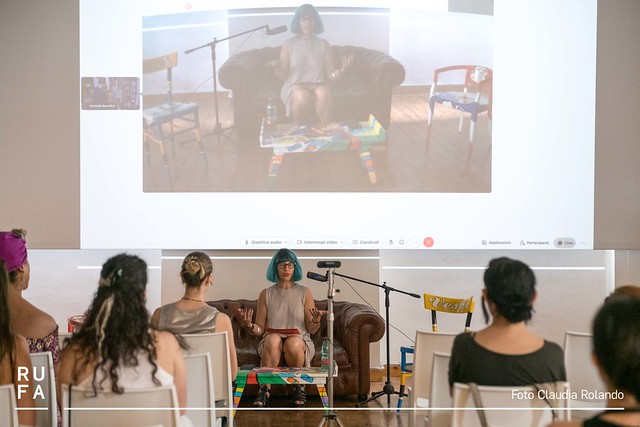