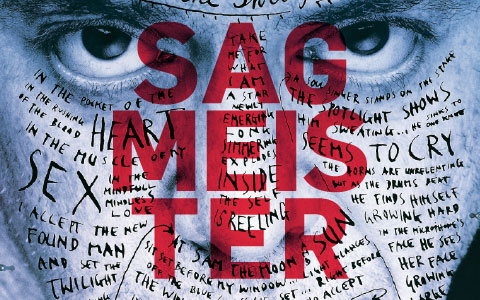 There is only just over a month to go until the arrival of Stefan Sagmeister in Rome, the well-renowned artist and designer chosen by Rufa as a special jury member for the Rufa Contest 2015. The designer will decide who should be the winner of the Academy’s internal contest, now in its first edition, announcing the prizewinner during the show “Road to creativity” leaded by the artist at the Olympic theatre from 5 pm onwards (the event is free, info and booking on eventrufa.it). An extraordinary event featuring the announcement of the prizes and the special mentions named by the contest’s sponsors and partners. The Rufa contest inaugurates its first edition, and from now on it is going to involve every year one of the greatest exponents of the international contemporary arena to join the selection board of the competition in order to create a great public performance. Sagmeister has chosen Rufa Academy because both share the idea of experimenting new languages. The designer, Austrian, class 1961, who has been based in New York for years is recognized today as one of the gurus of the visual communication. He has put his signature on a number of the most ironic and cutting-edge advertising campaigns of the last twenty years. Valuable handbooks highlight many of his works such as the legendary Lou Reed’s “Set The Twilight Reeling” album cover (1996) where the songwriter is captured in cold colors, light-blue skin and the face covered in writing, but also “Mountains of madness”, by H.P Zinker (1995). Sagmeister has worked a lot with the music industry to further the creativity of various artists such as David Bayrne and the Rolling Stones, gaining the prestigious Grammy Award in the 2005 for a Talking Head’s album cover design ( Best Boxed or Special Limited Edition Package category). During the 90’s his posters designed for Aiga, the America Institute of Graphic Arts, have confirmed the artist as one of the greatest exponent of the punk aesthetic, including the two erect tongues facing each other in “Fresh Dialogue”, which has been highly controversial in 1996, or the knife made writing in 1999. Over recent years Sagmeister has started to develop theatrical works aimed to trigger a reflection and a debate on current global issues following his philosophy, his work and his artistic language. These are fun and intense shows, in which the artist’s fanciful and ironic poetic characterized by visual journeys, leads the viewer towards a confrontation with the contemporary world. “The happy show” is the format that Sagmeister performs all around the world, a public performance which aims to give happiness through visual experiences.

The date for the great happening is set for the 26th of June at 5 pm at the Olympic Theatre in Rome
For info and reservations event.unirufa.it.