The idea of absurdity that is built from the stages in facing the absurd condition and how one loses perception of time when restrained by doing the same activities repeatedly. This way anticipation and experience are able to communicate with each other; moreover the idea of an aspect of reality which lies beyond the changes of a world as it’s perceived by senses is a condition of expectations beyond experiences.

Vanshika Agrawal bounds herself by performing the dead makes herself devoid from thoughts, emotions and purpose, questioning the relationship between existence and meaninglessness of life. Through deconstructing the individual identity into multiple identities through the medium of photography, she illustrates the consciousness of one’s own death in the presence of absolute meaninglessness, which triggers the focalization to contemplate deeply about life and death without limiting the portrayal.

Ghazal Zare Zadegan transforms memories into a physical narrative, recalling that a language biography is not part of everyday social practice. With her video installation, the artist investigates the instability of human existence. This fragility, with its simultaneous stability, and the balance between becoming and fading away, is a principle of life which the artist wants to track with her work. 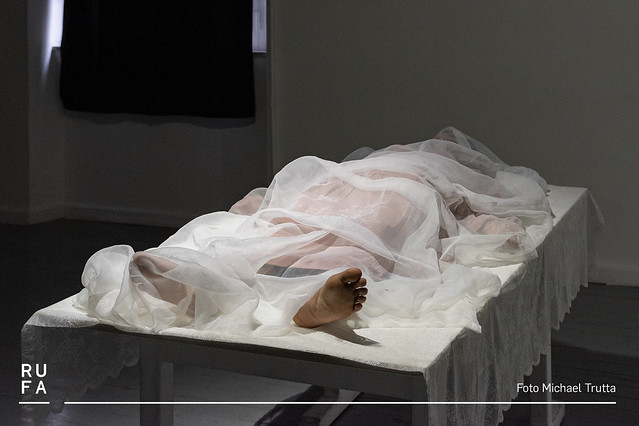