The “People” exhibition allowed visitors to undertake a journey in many directions. A double path that reveals meeting points and trespasses on the same theme of two artists: Celeste Esposito and Carlotta De Martino. This happened at the opening of the “Solo exhibition”, on January 22nd at RUFA Space.

The two artists showed that the “People” are those who exist clearly on the work, which is also a real dimension of social condition and spiritual existence, and precisely in their being bearers of truth, they dissolve or decide not to turn their eyes to it.

“People” is a disappointed expectation.

Celeste Esposito has carried out an artistic operation that places the viewer in a position of observing the borders, using mostly a pictorial medium with a specific brushstroke, controlled but with a soft and watery appearance. The boundaries are social and personal. The People of Celeste Esposito are fluid, and as such live in the eternally present moment of becoming, immobilized in their inconsistency by the fear of ceasing to exist.

Carlotta De Martino follows a personal and individual path of depth, inviting every single spectator to face himself. The look is turned to an indefinite time, without boundaries, where the person enters into a relationship with emptiness. Her purely pictorial work shows us People from behind, whose face we don’t know, which shows itself to us as a portal with which we enter into a relationship every day, Us and the other. It is a look towards the infinite, the insubstantial, towards a frozen lapse of time. In fact, her works seem to stop the spectator and freeze him/her in that instant until you feel the alerting of yourself and space: a losing to be lost. The mirror takes on an important role: it is a reflective surface of our person, a medium through which we take note of who we are, not as material beings, but as insubstantial beings.

The exhibition will be open until January 24th 2020. 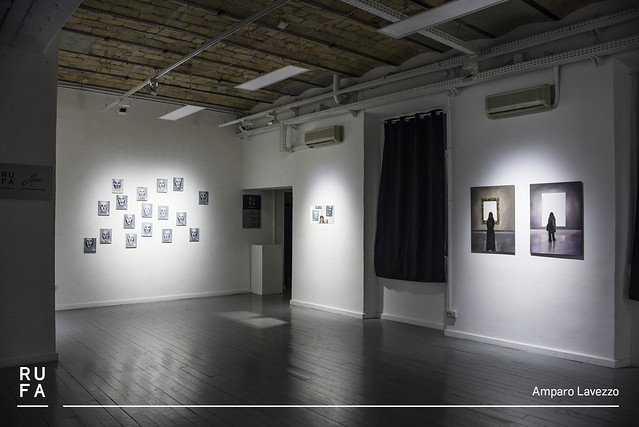