Anton Giulio Grande, extraordinary commissioner of the Calabria Film Commission will be the guest speaker at the meeting with film students next 7 June at 10.30 a.m.
This is Grande’s first outing in the field of film training.

The meeting, which will be held in Rome at the Aula Magna accademica in via Taro, 14, is a meeting born after the recent production of the video clip ‘Alla salute’ by Jovanotti in Calabria, supported by the Calabria film Commission within the Calabria straordinaria project of the Tourism Councillorship, led by Councillor Fausto Orsomarso. A project that highlighted the interlocutive capacities that a Film Commission must have, in order to assert itself in an increasingly broader market, specifically for a new narrative of the Calabria region.

The meeting will take the form of a Talk, during which strategic themes for the art and film industry, its relationship with training and film production will be addressed.

As a child, he dreamed of designing clothes for the beautiful soubrette stars of Saturday night shows, and thanks to his talent, he managed to realise this ambitious project.
Anton Giulio Grande is, in fact, today one of the favourite stylists of TV stars and in many shows and dramas his clothes are featured.
Born in Lamezia Terme, he studied at Polimoda in Florence (where he won the prize for Best Student at the school’s 20th anniversary celebrations) and later at Fit in New York; at only 23 years of age he took part in the Piazza di Spagna fashion show and in 2001 was a great success at Milano Collezioni; he has worked for prestigious maisons such as Gattinoni and Sorelle Fontana, before launching his own brand in 1996.
If today Grande is one of the most appreciated haute couture designers, it is also because he dresses the most popular celebrities (to name just one, Belen Rodriguez who was dressed by Anton Giulio at Sanremo), but in his interviews he always stresses that you don’t have to have a perfect physique to wear his creations.
In fact, when he designs a model, he thinks of a woman who is not beautiful, but has a great personality, one of those who when they walk into a room immediately get noticed and then remembered for a long time. But the success of his collections is not only linked to the visibility due to the star system’s spotlight, but to the quality of garments that are made entirely by hand, relying on the craftsmanship of his land, in workshops where even sewing machines are not used. Inevitable, given his Calabrian origins, to liken him to the figure of the most famous son of this region, Gianni Versace. Although by now Anton Giulio is no longer a child prodigy, a beautiful promise from Calabria, but an established professional in the world of haute couture.
Among the divas who wear his clothes are Valeria Marini, Alba Parietti, Nina Moric, Aida Yespica, Pamela Prati, Belen Rodriguez, Anna Kanakis, Eva Grimaldi, Elenoire Casalegno, Anna Valle, Claudia Gerini, Natasha Stefanenko, Martina Colombari, Cristina Chiabotto, Manuela Arcuri, Anna Falchi.
Among the stars wearing the AGG label are Fabio Fulco, Danny Quinn, Giorgio Pasotti, Marcus Schenkenberg.

Since 11 April 2022, he has been extraordinary commissioner of the Calabria Film Commission Foundation. 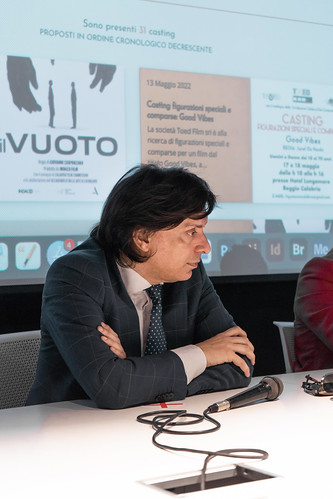