Claudia Matarazzi was born in Rome under the sign of Aquarius. Astrology has never played quite a part in her life. However, being an Aquarius determined her being elusive, creative, a little bipolar and always on another planet. All in all, being an Aquarius helped her out of many uncomfortable situations.
After attending classical high school, she enrolled in Uni studying civil engineering. A few months later, Claudia took the most important decision of her life dropping out of the course to go after her great passions: food and design.
She started working behind the scenes of some Roman restaurants and she joined RUFA. At the Academy she found herself. Claudia fell in love with the history of design as well as design courses to the point that 3D modeling became a way to express herself.
Time went by and she turned a little nerd with the academy became her shelter. The fondness for interior and exhibit design, brought her to Milan. After attending a Master and exporting the true recipe of carbonara, she got hired in a top-tier event-design studio. Now she spends her days dealing with interiors, fashion shows, international events, window displays and showrooms.
Claudia is happy, but she is tired as hell.

Centonove: the secret of the ocean

Centonove, The Secret of the Oceans was conceived as a voyage of discovery in search of a new awareness, accompanied by the images of National Geographic and the colors of Pantone.
In this space the public can touch, understand and immerse themselves in the underwater world, seemingly distant, of coral reefs and the ocean. With the intent to approach, inform and raise awareness of the underwater heritage that we are losing.
The event is set in the beautiful setting of the fishing village of Marzamemi, Sicily, in its heart: the tuna fishery, Piazza Regina Margherita and the Balata.
It starts in the main square of the village, where an installation has been realized, architecturally composed by the graphic combination of the two logos. The lights of the passage of National Geographic recall the colors of the wonderful sea creatures projected on the water of the fountain.
Once inside the Tonnara, one enters the internal garden, where a lounge area has been placed before the actual entrance to the exhibition. Most of the furniture is part of the Kartel Love the Planet collection.
The exhibition has been divided into four macro areas: Discover, Experience, Know, Understand. Following the path, the public is accompanied by the hand in the discovery of the themes of each room. From the stairs to the installations, passing through games of light and colors, the visitor is immersed in the emotion of Centonove.
Discover is the first area you reach, it is dark and reproduces in scale the coral reef. The majesty of the reef leads the visitor to feel like a fish in its habitat, the corals are made of soft silicone, they move and can be touched, the lights and sounds of the water add verisimilitude to the environment.
Then you come across a thousand luminous bubbles, reminiscent of ocean currents, which lead to three spaces where augmented reality allows you to swim with dolphins, sharks, manta rays and many other fish.
The third area is dedicated to the photographic exhibition of David Doubilet, underwater photographer. The exhibition is designed in a fluid and organic way, the shape recalls the wake of the waves and the lightness of water. At the center of this area there is a water tank with a curved ledwall that intersects with a wooden frame, echoing the logo of NatGeo.
The last area, understand, is designed again in the dark with a faithful reproduction of a reef on one side.
This reproduction is entirely white, made of Secore’s experimental bio-ceramic, to symbolize the bleaching of the reef due to climate change.
Through a touch screen, you can literally bring the corals back to life. This metaphor is meant to make visitors aware of the need to change the course of events and remedy the environmental disaster we are causing.
The exhibition ends by returning to the central courtyard.
In the port of Balata, in front of the entrance of the Tonnara, has been placed a passage of National Geographic that frames the village. In the same place, for the inauguration of the exhibition was also planned a dinner for charity, made under a carpet of stars on the sea. 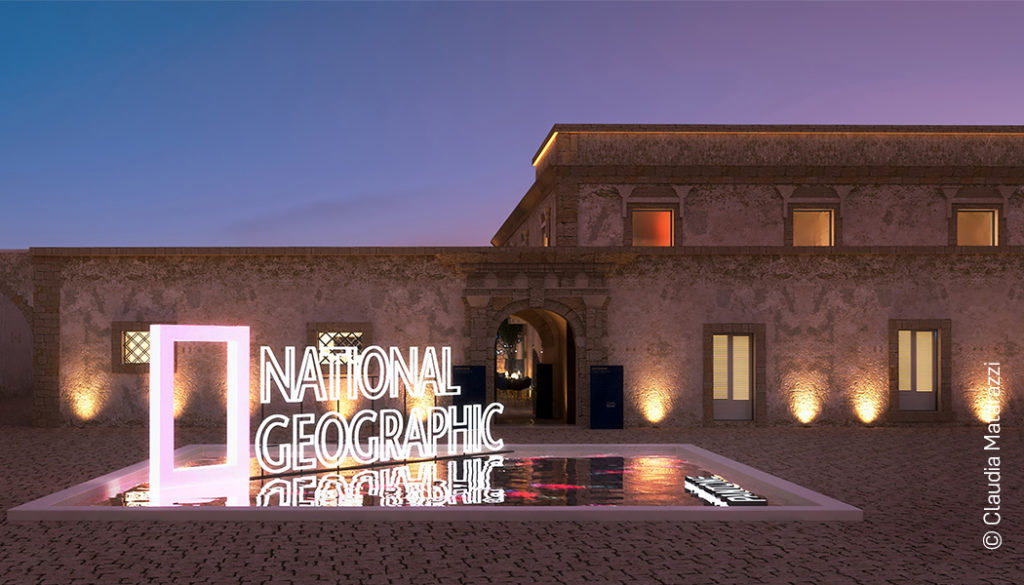 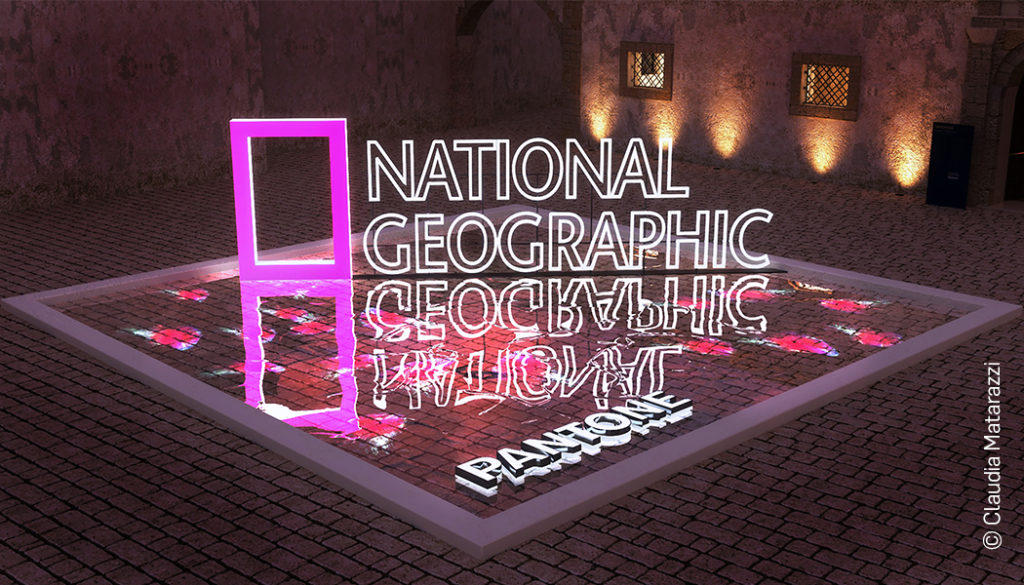 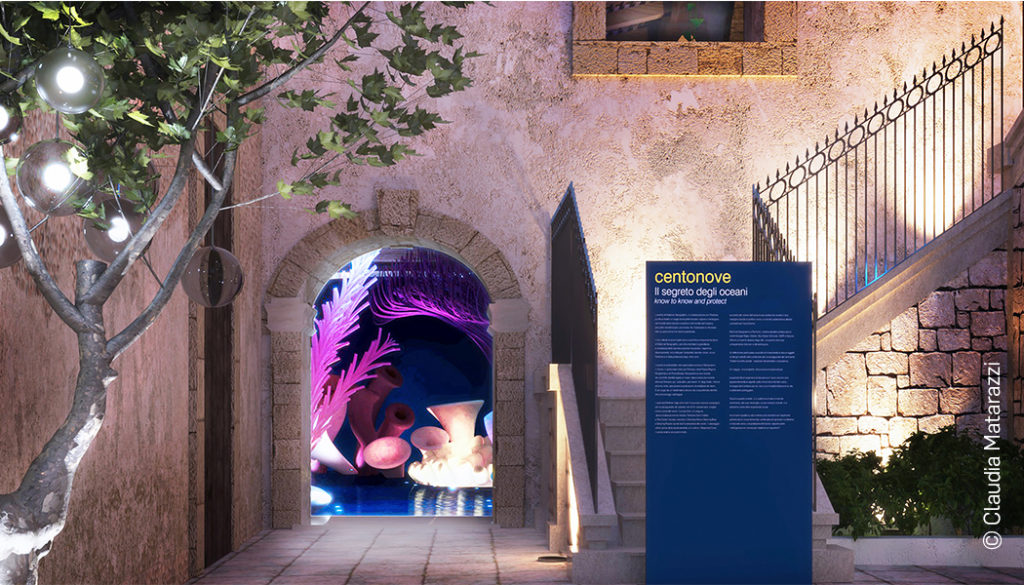 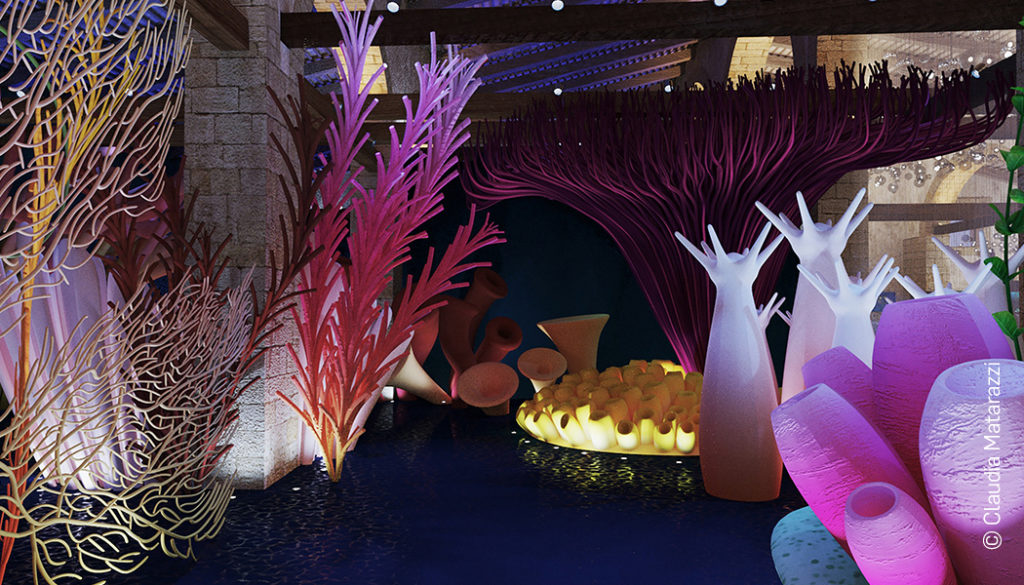 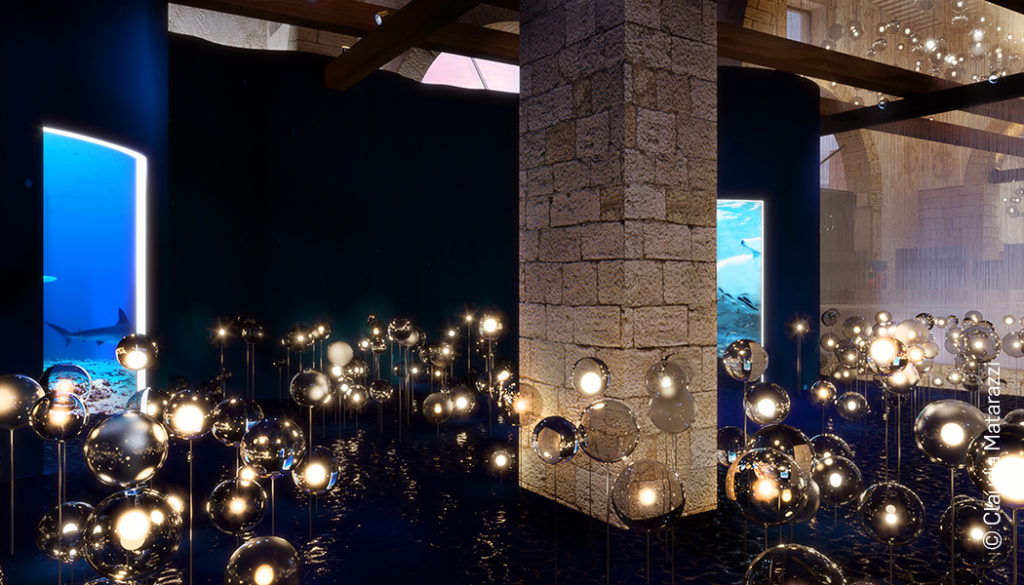 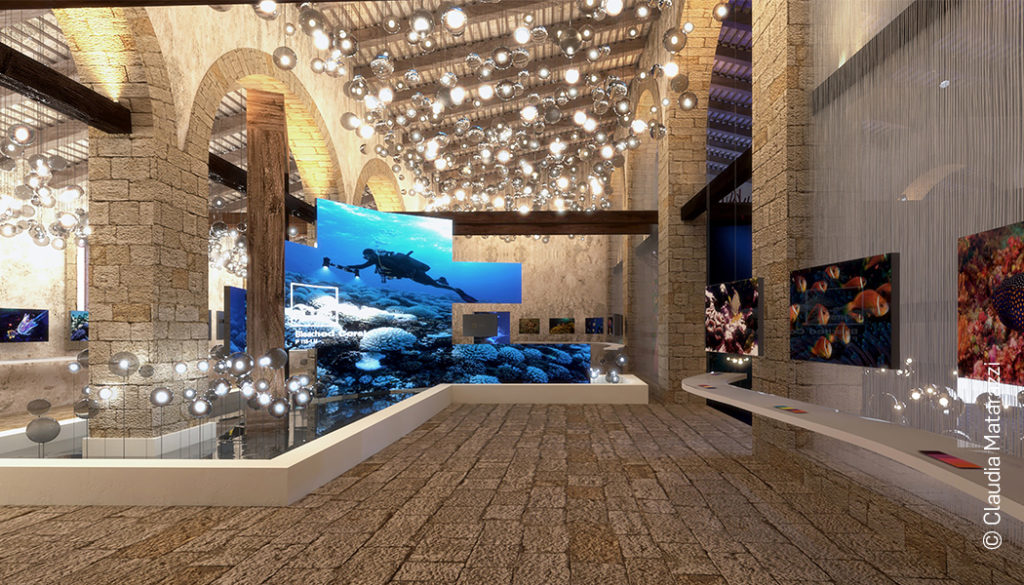 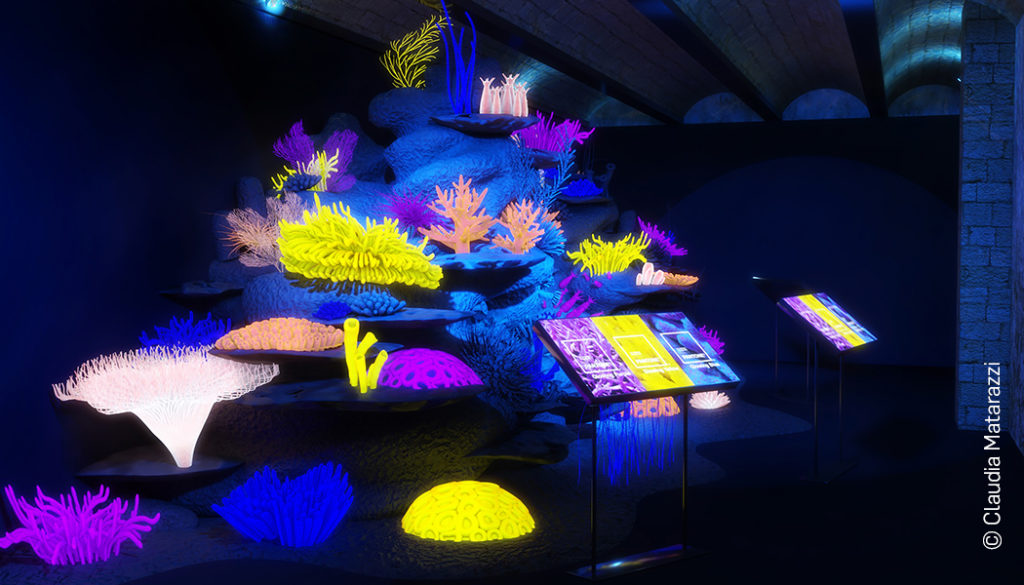 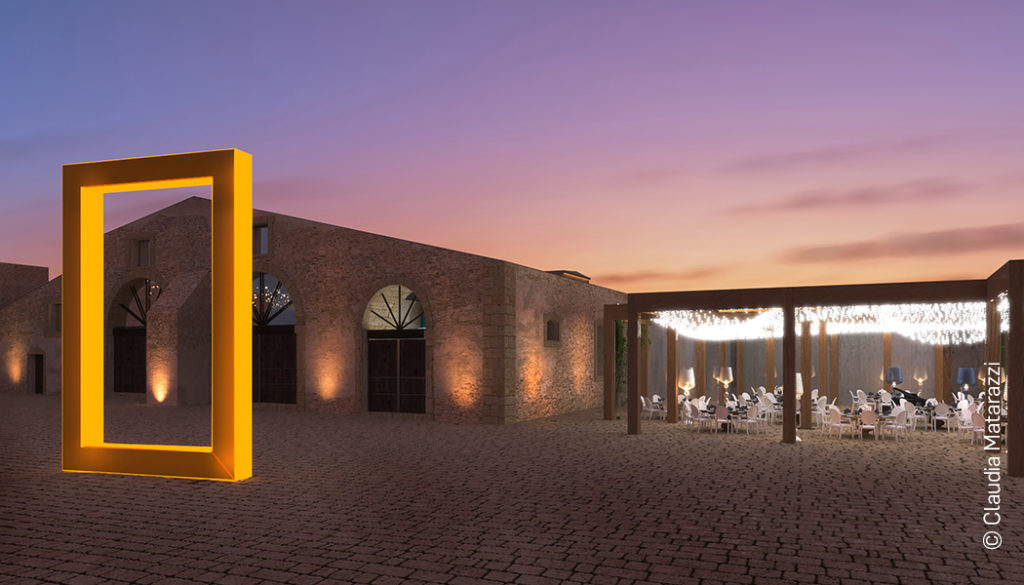 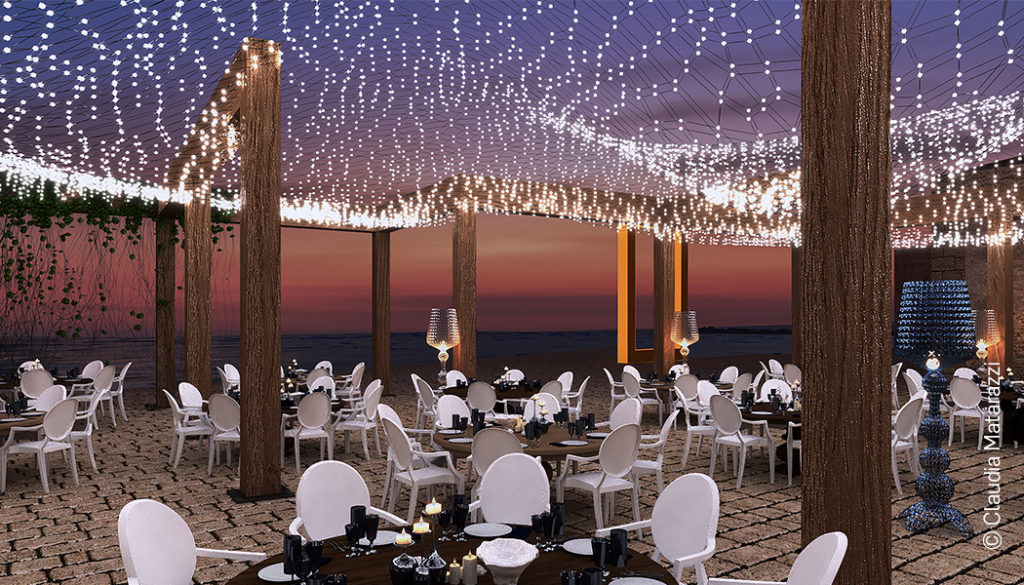