The 5AM exhibition was born from the need of 4 young RUFA artists and students from Ukraine and Belarus to express their feelings and anxieties towards an ongoing war, still present and very close to all of us. A war whose horror we constantly, lost in our daily lives, forget.

At 5 a.m. in Kiev, the Russians started a full-scale war against Ukraine, a war against Europe, a war against the whole world.
The works of art you will see on display were created by people who experienced the whole situation at first hand, who were told from childhood about all the massacres of the war, which they then had to deal with in reality. In the territories of the CIS countries, there is no generation of people who have not experienced this horror.

The art of those who survived this chaos will never be the same again. The beauty and lightness of yesteryear have turned into a reflection of our reality.

I am an artist and I am Ukrainian. On 24 February, I opened my eyes to the sound of explosions in Kiev and, in an instant, I realised that every Ukrainian was experiencing the same thing that day. Every Ukrainian was awoken by the deafening sound of explosions and sirens.
I was 10 years old when the war started in eastern Ukraine. I celebrated my 19th birthday in a cellar, hiding from the missiles that flew, and continue to fly, towards all the cities of Ukraine during a large-scale Russian invasion.
Until 24 February, I studied at the National Academy of Fine Arts and Architecture in Kyïv, and now continue my studies at RUFA. With this exhibition, I want to remember that the war in my country is not over yet, and in the name of freedom, my people are paying the highest price. My work is the quintessence of the emotions I feel because of the war.

I was born in Dnipro, Ukraine.
I was studying in Kiev, attending the third year of painting. I was planning my future, like everyone else, but I learnt that plans can be ruined in a second, and life can change you in a sudden and unpredictable way.
What does an artist usually want? Workshop, materials and something to eat between canvases. It is hard to realise that you no longer have anything you are used to, your favourite paintbrush still lying dirty next to the table, next to the unfinished canvases hastily leaning against the wall.

I was born in Kiev, Ukraine, in 2001. I have spent my entire life in Ukraine. This place filled me with strength, gave me the opportunity to develop and be myself. We are all RUFA students from Ukraine and Belarus. One day
changed our lives. That is why we decided to organise the exhibition “5AM”, to express and tell our feelings and point of view on this terrible situation.

I come from the last dictatorial country in Europe. From a country ruled by a murderer.
Looking at the war through the eyes of a Belarussian one feels shame, shame that the Russian army is advancing from the territory of my country, destroying cities and killing the Ukrainian civilian population.

Listen to the protagonists’ words 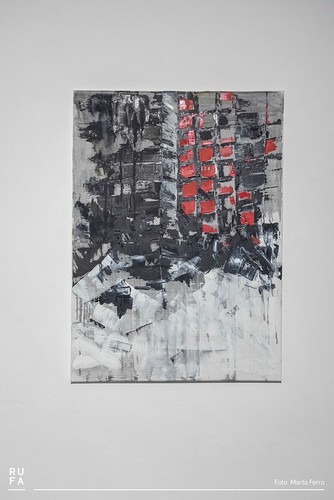