Exhibition of the artist Loriem Giulia Saccà, curated by Vanshika Agrawal, under the supervision of the lecturer Fabrizio Pizzuto.
Inauguration: Wednesday 21 September at 17:30, RUFA Space, via degli Ausoni 7.

A voyage into the artist’s visionary world to witness the life on Mar crisium, /ˈkrɪsiəm/. In Latin meaning, the “Sea of Crises” is one of the smaller lunar maria, in the Moon’s Crisium basin, dominated by female characters and extraterrestrial creatures communicating through a tangled lunar symbology in surreal metaphorical conflicting scene.

A place where all the characters of Saccà’s visionary world originate. Her works create a conflict between classic and the modern world. Communicating through a tangled lunar symbology, a language she uses for the moon world. It is dominated by female characters and extraterrestrial creatures who hold and guide the light of Mar Crisium, revealing themselves as evil nightmares, trying to capture their land, situated in a mixed architectural setting of antique roman statues, lanterns to modern skyscrapers and towers. The characters in the work take inspiration from Greek Mythology.

Presenting each single work as a different setting of the expedition, with elaborating elements as signifiers, autonomous like fragmented pieces of memory, where you encounter various characters in a completely suspended world which is unapproachable thus becoming immortal and eternal. Stylistically elevated, her intricate and striking illustrations achieve memorable metaphorical and even poetic effect. Saccà’s fictional illustrative voyages to the moon are very much like Verne’s novels that achieve a unique blend of pseudo-technical precision and almost surreal metaphorical sweep concerning human failings in the face of both wealth and scientific progress.

In the same sequence the artist performs, the character of jester from the medieval era, who were itinerant performers known for their whimsical sense of humor to entertain people but at the same time highly intelligent fools, portraying the dual and conflicting nature of persona.

See the artwork and the performance set 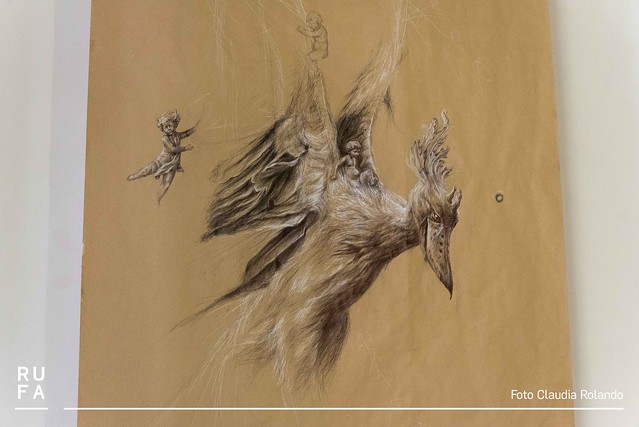