After the opening at RUFA Space, EXXTRA, the exhibition project of the Multimedia Arts and Design school, moves to Milan for the Milan Design Week that will be held in September. The exhibition, visitable from September 4 to 10 is part of the Superdesign Show, and more specifically of the Discovering – experiments and new technologies section: a program dedicated to sensible, thoughtful, and forward-looking contemporary design, curated by Fulvia Ramogida.

EXXTRA is a project curated by Daniele Falchi and coordinated by Giulio Pernice, where the protagonists are the second-year students of the Master of Arts in Multimedia arts and design.
At the Fuorisalone space three artworks from the original exhibition will be presented, reflecting on the critical issues arising from the current pandemic situation, each one in its own way. The gradual loss of the human dimension in favor of the digital condition has created a relationship paradox that is difficult to explain.

EXXTRA wants to collect these impulses to reflect upon other worlds, other sexualities, other living species, which are “extra” compared to the world in which we live. The audience is invited to participate firsthand in the exhibition thanks to the interactivity of the works; the body, in fact, here plays a key role. The three projects combine the purely artistic aspect with that of industrial design, managing to blend classic formal elements with fully virtual architectures. The ultimate goal of the exhibition is to think about the complex relationship between real and virtual, providing a range of different points of view.

WORKS IN THE EXHIBITION

MUTUAL by Gianmatteo Buttiglione and Mirko Pelliccia
The installation reproduces the continuous relationship between the individual and the environment, in which every event causes an effect, whether positive or negative for both parties. The visitor is called upon to interact with this artwork: a pedestal on which is set a container endowed with its own life, visible from a distance.
Once they get close, by immersing their hands in this water-filled case, everyone discovers that they influence the underlying ecosystem in real time, thus conditioning its developments and outcomes according to the fluidity of movements, which may or may not be harmonized with it. In fact, this installation not only can be molded but it can also respond to the solicitation it receives, just like a natural system yet in more immediate times.
What Mutual stages through synesthesia is a delicate feedback system, in which both human and nature make choices influencing each other’s existence through numerous evolutions.

HOLOX by Daniele Falchi and Simone Tecchia
The project aims to investigate – in the form of an interactive installation – the complex phenomenon of extinction, focusing on its behavioral matrix.
Ecosystems that survived major mass extinctions suggest us the adaptive characteristics of living beings, destined for destruction in case of alien elements or habitat modifications.
In this context, the behavioral factor plays a central role, determining the adaptation and subsequent evolution of the species dwelling in the ecosystem.
The installation sees the creation of a holographic cell projection in continuous expansion, determined by the alien presence of the viewers who – with their movements within the surrounding space – will influence its evolution or cause its extinction.

FLOW by Consuelo Donati
In little more than thirty years, the hybrid man-machine has been transformed from a purely fantastic figure into an everyday experience.
This immersive experience with virtual reality analyzes the concept of expanded body within the extended and confused space that is the net.
There is no gravity inside the internet networks that intertwine multiplying endlessly like an invisible spider web, suspended who knows where. The body “is covered” by the connected body that multiplies and shatters on the internet, demonstrating its intentionality in the world and for the other world. What introduces this new condition is precisely this re(e)volution of the body or rather its “fluid mutation”.
The physical body is transformed into a fluid body traveling in other dimensions. Generally, fluids are considered the materials that could continuously change their shape adapting to the container; Flow hence becomes the container of this expanded body, fluid and suspended in a warm and relaxed desert.

Discover all of the works of art of EXXTRA

Relive the event at Superdesign Show

Look at the images of the event at Superdesign Show 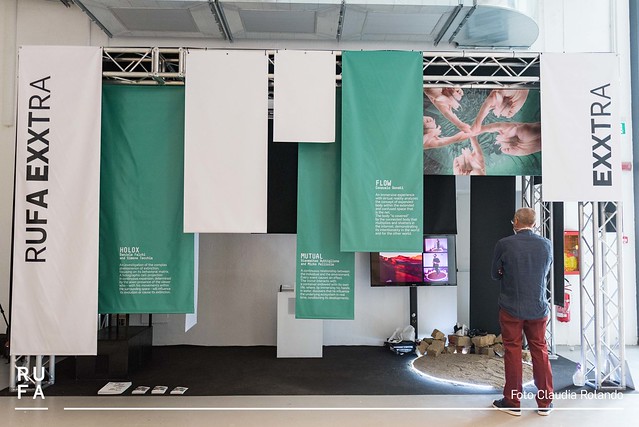